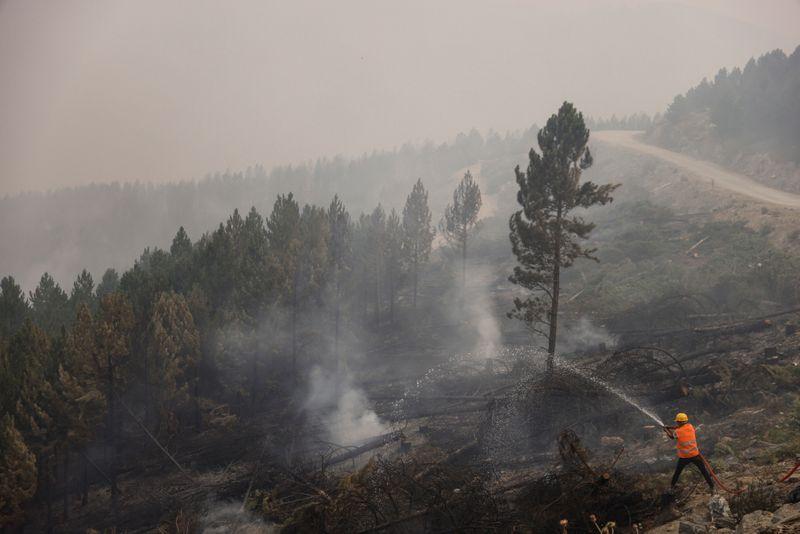 ISTANBUL (Reuters) – The first cancellations of tourists booked on one of Ozkan Selcuk’s cruises off Turkey’s southern coast came when forests near where he takes visitors to watch turtles took over fire.

A year after the global COVID-19 pandemic devastated Turkey’s tourism industry, the worst forest fires in living memory along its southern coast have dealt another blow to the sector, which accounts for around 5% of the country. Turkish economy.

In ten days, fires destroyed tens of thousands of hectares of forest in the Mediterranean and Aegean provinces, eight people died and thousands of Turks and tourists fled.

In Mugla province, where the main tourist resorts of Marmaris and Bodrum are located, at least 36,000 people have had to be evacuated, including from some coastal seaside towns.

The easing of travel restrictions linked to COVID-19 this summer had raised hopes for a rebound in the Turkish tourism industry, but for Selcuk and others in his region, the wildfires put an end to it.

“I have two more reservations for Saturday, but I haven’t heard back from them,” Selcuk said. “I’m afraid the fire will continue. We wake up with ashes falling on our homes and on our boats.

Firefighters have contained most of the 200 or so wildfires that have broken out over the past ten days, but on Friday there were still a dozen fires on the Mediterranean and Aegean coasts, according to official data.

“There are no new bookings due to the forest fires. Existing reservations are canceled. The hotels are also empty, with early departures, ”said Bulent Bulbuloglu, head of the Southern Aegean Hoteliers Union.

Britain’s decision on Wednesday to keep Turkey on a COVID-19 “red list” for another three weeks is yet another blow to the industry.

Tourism Minister Nuri Ersoy said on Friday that Turkey is sticking to its targets of 25 million visitors this year and $ 20 billion in tourism revenue, which is still a long way from the $ 34.5 billion before the 2019 pandemic.

“We expected UK visitors to come back, but that’s not happening,” Bulbuloglu said.

Most of the tourists who visit Turkey are British, followed by Russians and Germans. In 2019, more than 2.5 million visitors came from Britain, according to official data.

In 2021, foreign arrivals were 5.7 million in the first half of the year while revenues were $ 5.5 billion, according to official data.

Former Tourism Minister Bahattin Yucel said the government’s forecast was unrealistic. “In addition to the epidemic, there are now forest fires… it will take a long time for the southern Aegean coast to recover,” he said.

Gonca Umul, whose family runs a guesthouse in the coastal town of Oren, had hoped that a busy July would reignite a recovery from last year’s crisis, but his small hotel is now empty after the evacuation of many residents.

“We were full for July and even turned down guests. Now people are only calling to cancel their reservations, ”Umul said.