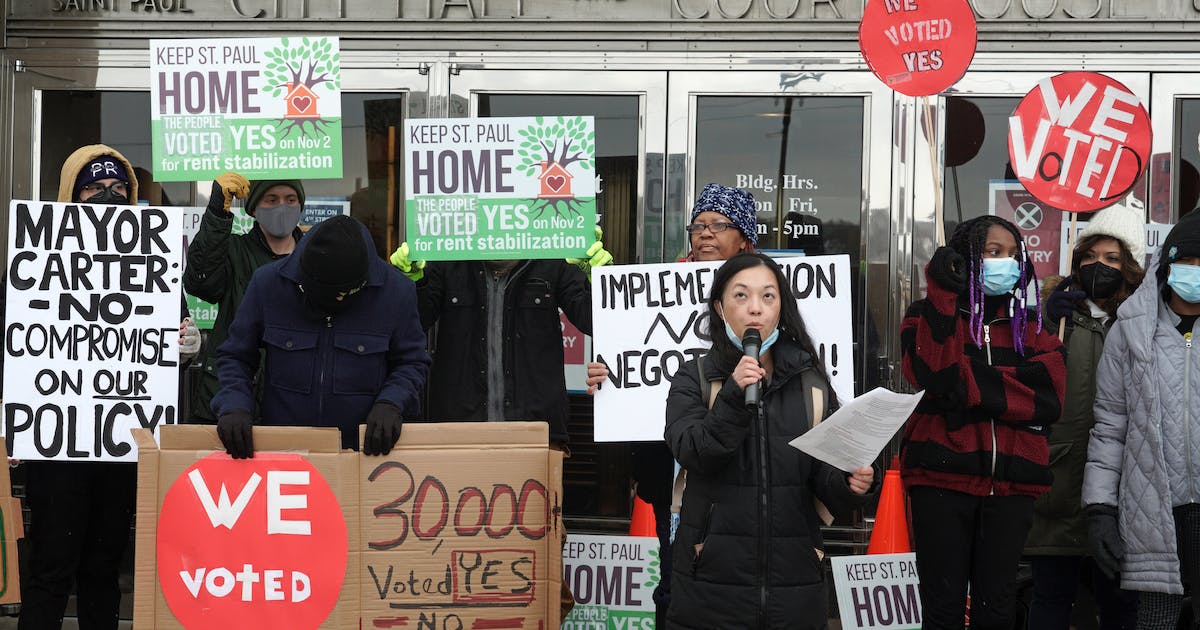 Regarding Thursday’s newspaper article “St. Paul nears new rent control exemption”: I attended that city council hearing where these decisions were made, and I am deeply disappointed with the how the rent stabilization ordinance has become unrecognizable from what was passed in the referendum last November. I’m afraid this will serve tenants badly who want to stay in their homes and need stability to do so.

The amended ordinance now allows for vacancy control to be removed, which was not in the original, and landlords are now free to reset rents without limit once a unit is vacated. Another amendment exempts affordable housing from the 3% rent cap. Does that make any sense? If anyone needs the rent cap, it’s the very people who live in these affordable units. I have a friend who lives in one of these seniors affordable housing complexes. Her rent just went up 8%, and she’s on a fixed income and thinks she’ll have to move now.

Finally, the council extended the exemption for new construction from 15 to 20 years, an exemption that dates back 20 years. This will exempt thousands of units from rent stabilization. I sat on the mayor’s task force, made up of tenants, landlords and developers. We met weekly for six months to come to an agreement on how the ordinance should be implemented. We didn’t always agree, but we came to a consensus on a 15-year exemption for new construction, which the mayor also recommended.

All of these changes go against the needs of this city’s tenants, and against the wishes of 53% of its voters who asked for rent stabilization last November. The current ordinance as it stands is ineffective in helping tenants stay in their homes long term. I reject it and I ask the City Council to vote no on the adoption of this totally inadequate new version of the rent stabilization law.

Two recent stories, one about the lack of control and compliance for the distribution of taxpayer funds to the Department of Social Services and the other about the ever-increasing budget and delayed completion of the Southwest Light Rail, raise serious concerns about how government is working for citizens (“DHS boss pledges to do better,” Sept. 9, and “Light Rail Project Still Needs Funds,” Sept. 9).

Take the DHS. The state’s largest agency has a pattern of poor practices when it comes to managing and distributing taxpayer funds. The answer of his boss? “We have worked diligently…to improve” these processes since 2019. What function in state government has overseen these improvements? Is it reasonable to expect, three years later, a real improvement? How does a leader survive this failure of execution and management?

Light rail cost overruns and delays should come as no surprise to those who are realistic. These big projects always seem to be late and over budget. And yet, we blindly believe the promises made. They are made, of course, to get the project approved, because who in their right mind would approve something that costs twice as much and takes twice as long? Please, Star Tribune, post a section reviewing pledges, budgets and timeline commitments by Metropolitan Council leaders and state government leaders since its inception. It would be instructive.

Good government is not just about the ability to approve budgets (see the nearly $4.3 trillion federal COVID relief), although that is a requirement. Where we fail is in monitoring and measuring how the money is spent. Who sets the targets for the results of expenditures and “investments” of taxpayers’ money? Who holds government departments accountable? Who summarizes the results and notes their successes or failures? In short, who counts the points, objectively?

Our failure to make the money we pay in taxes more productive leads citizens like me to want to see the majority of the state surplus returned, in proportion to all taxpayers, rather than invested without accountability.

The Star Tribune op-ed criticizing the state’s DHS for its failures in handling the pandemic, mental health, and child care grant processes could have considered some additional factors (“The human services in trouble again”, September 8).

I spent much of my 20-plus years running state and county social service programs getting into situations like these and trying to restore order. In my experience, the solutions to the problems are not as obvious as the Office of the Legislative Auditor suggests.

I would like to know more before concluding that there is a chronic failure of management at DHS. Does the department really have enough people with the right skills to do the job? Was it under political pressure that things were rushing? Perhaps the legislature and the public share some responsibility for this failure.

If OLA personnel were required to serve a year in government office, I suspect their reports would present a more detailed analysis of issues like these.

In an unprecedented statement, a Florida District Court judge found that a “special master” was needed to review executive property for executive privilege so that the executive could access the documents of the executive belonging to it. A judge halted a criminal investigation resulting from a court-ordered lawful search so that this bizarre scenario could play out (“Special master’s order is, on the whole, reasonable” and “The order of the special master is potentially disastrous”, Opinion Exchange, September 8). This is not only unprecedented and legally dubious, but deeply absurd.

And it gets worse. A special handler would need the highest security clearance to examine all the highly classified documents, which were recovered from an unsecured resort the former president left months ago for the summer. The documents are likely from and should be under the control of the National Security Agency, CIA, FBI, National Reconnaissance Bureau, Department of Defense and many others. These documents are sensitive information compartmentalized within agencies, and often not even shared between agencies.

And now a district court judge has assumed the power to appoint someone who will need all those highest clearances. All this so that a legal criminal investigation can proceed. And understand, the named person could possibly be someone recommended by the person who stole the documents, kept them in an unsecured place, moved and concealed them to avoid discovery, left them potentially subject to hostile foreign intelligence actors, allegedly lied about their presence and resisted returning them to their rightful owner despite repeated and intensified efforts.

The impending closure of Schatzlein Saddle Shop brought back many memories for me, as my office, the Model City Communications Center, was located at 4th Avenue S. and Lake Street in the 1970s, and I lived at Lake Street and Portland Avenue (“Lessons from a Business Closure,” editorial, Sept. 6). But my great-grandfather was also an immigrant, an Irish pioneer, who operated a tack shop on Lyndale Avenue N. in the late 1900s. 1800. He won first prize for a horse saddle at the Chicago World’s Fair in 1893, and he and his sons went on to found one of the most respected saddle shops in the West – the Connolly Saddle Shop in Billings, Montana. (still open today). John B. Connolly was an Irish patriot who joined the Fenians, fought for Irish independence and also fought in the Irish Papal Brigade. John was a defender of justice for the native tribes and had u n close relationship with the tribal leaders of Montana. His children would probably have known the Schatzlein family. I am sad to see this monument closing its doors.