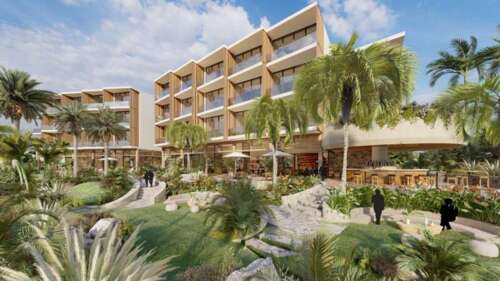 A computer rendering of the Ariel Sands Resort hotel project.

Plans to build a new Ariel Sands resort were due to be presented to the Development Applications Board this week with a recommendation to allow the project to proceed.

A technical agent’s report said the property’s topography would reduce the visual impact of South Road for most neighbors, while allowing guests to see the South Shore resort.

The report added: “The change in Dill Lane’s visual field will certainly be dramatic. However, some level of change is to be expected given the zoning of the adjoining land as tourism, from which this development has been carved.

The technical officer noted that although the 84-unit project includes a condominium building, none of the units on the property are proposed for residential use.

Due to the shutdown of the government’s computer system yesterday, it was unclear whether the DAB had accepted the technical officers’ recommendation.

The report said: “For the avoidance of doubt, the application proposes a tourist resort and all speculation regarding its residential use is factually incorrect.”

The officer also said a tennis court originally intended to be erected on farmland on the property was removed after environmental groups raised concerns.

“The two acres of agricultural reserve abutting South Road will be used for farm-to-table food production,” the report said.

“The smaller parcel of the agricultural reserve will be maintained as a lawn and can also be used in the future for farm-to-table food production.”

The original Ariel Sands Resort – co-owned by movie star Michael Douglas – closed in 2008 and all but one cottage were demolished in 2015.

Plans to build a new hotel development on the site were approved the same year, but work on the project did not progress.

New plans for the site were submitted last year after Mr Douglas announced he had teamed up with JTRE, a Slovakian property developer, to redevelop the 13.8-acre site into a five-star resort.

The technical manager said the new proposal was similar in concept to previously approved 2015 plans with a combination of chalets and hotels on site.

A four-story, 33-room hotel building is planned for the southeast side of the property with amenities including a 100-seat restaurant, bar, lounge and gym, all overlooking the South Shore .

The technical manager said: “All units have south-facing balconies, except for ground level units, which will have courtyards.

“This building will also house back-end operations including a service area, laundry and staff headquarters.”

The technical manager said that only the tallest buildings would be visible from outside the property and that the buildings had been distributed in the same way as previously approved plans.

The report adds that while the tallest buildings do not adopt a traditionally Bermudian roof design, this is not uncommon in large structures such as hotels.

“In this case, while the architectural elements of Bermuda are limited to a roof section over the villas and Bermuda-inspired art, the only element that has been underestimated and overlooked is the attention to the landscaping, responding to the design element of the image of Bermuda requiring abundance, lush and colorful subtropical vegetation.

“This will not only improve the customer experience, but also anyone who visits or passes through the station. Coupled with the maintenance of the forest reserve along South Road, which will be subject to a voluntary conservation management plan and the planned cultivation of the agricultural reserve, this is seen as a positive gain/trade-off for a more modern aesthetic.

The technical manager said that while the number of units proposed for the property was higher than the 2015 plans, the new plans actually had less site coverage.

“The resulting sitemap, while accommodating more beds and units, manages to result in less landscaping and more landscaping, a definite planning gain over the previous application,” indicates the report.

“The proposed station business model must succeed and cannot be based solely on the fact that it is seen as more intense development than pre-approval.

“In this regard, the Ministry supports this request, particularly in light of the fact that the environmental impact study has demonstrated that despite the increase in the number of beds and units, the impacts are of limited duration and minor. , with one exception regarding moderate impacts on the residents of Dill Lane.

The developers have previously said the project is expected to create between 60 and 80 construction jobs, with around 40 people employed at the station once it is operational.

Construction at the site is expected to take around two years, with an expected completion date of late 2024 or early 2025.