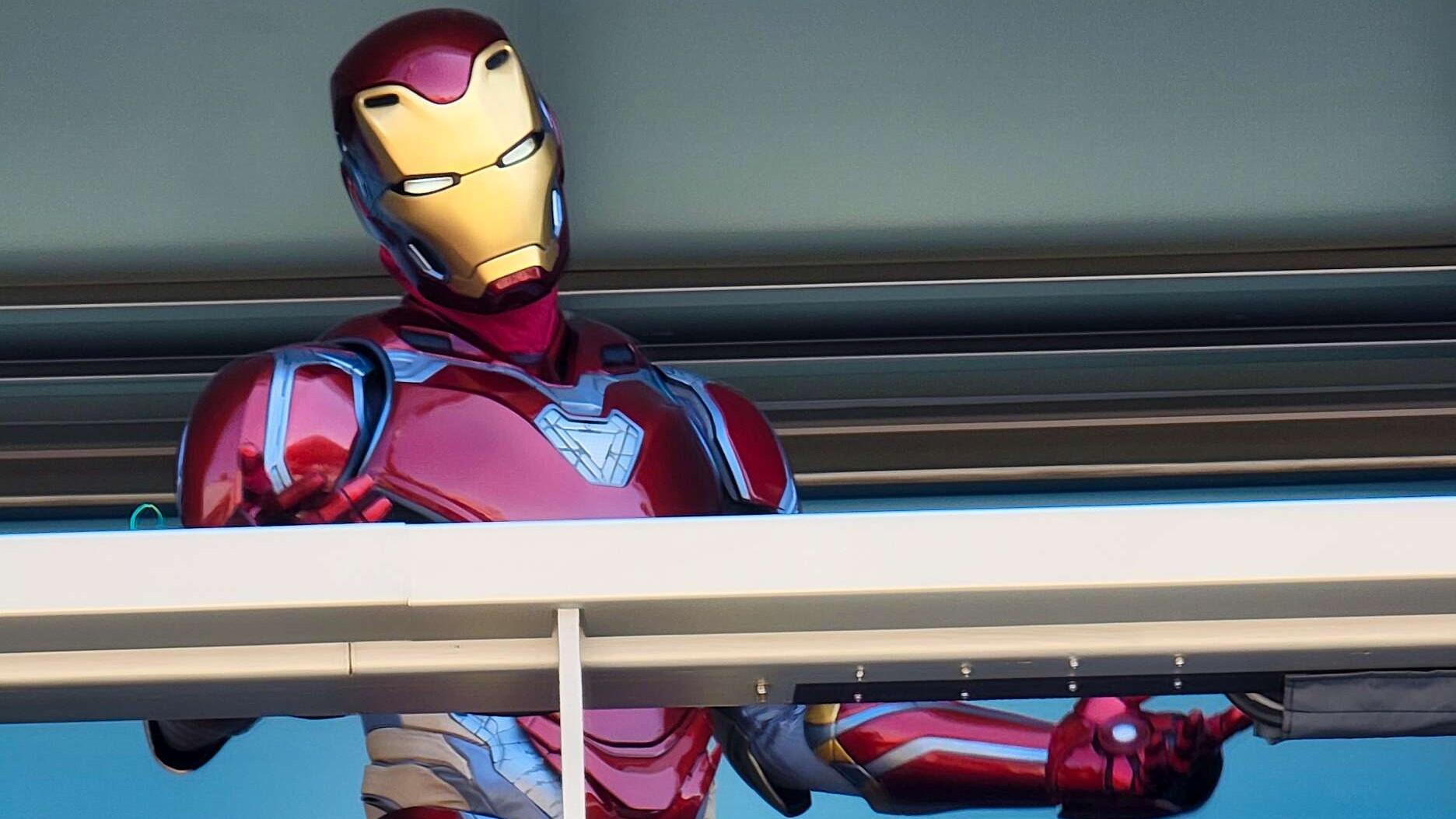 PHOTO REPORT: Disneyland Resort 07/26/22 (Iron Man on the balcony, Babu Frik on Batuu and a snail on a car)

Hi, hi, ho! We headed over to the Disneyland Resort to check out all the happenings around the park and see what’s new. So join us for this latest photo report of the two parks.

What we thought at first sight was that the Disneyland Hotel window cleaners seemed to do more than just wash the windows. The blue paint to the right of their work area is vibrant and new, showing that crews have been working to repaint the exterior of the sun-bleached window frames.

A new photo op can be found in Downtown Disney, near the former site of the AMC Theaters. Additionally, this weekend will see a Zom-Beats Bash at Downtown Disney LIVE! Workshop at 2 p.m., 3 p.m. and 4 p.m. from July 29 to 31.

In World of Disney, we encountered this great new Soul Spirit jersey.

And speaking of Spirit Jerseys, we’ve found a youth jersey as part of the Choose your collection of Path products featuring Grogu.

For Avengers fans, this new desk, pen holder, and mouse pad set can make your workstation look like it’s straight out of Avengers Tower.

The Esplanade currently houses a Honda HR-V that was wrapped in Main Street Electrical Parade 50th anniversary art, as seen on tons of merchandise. There is even a snail on top of the car.

This car is adorable and we wish we could drive it home or on the parade route.

Fortunately, it’s cooler today than it has been lately, but the crowd is still massive.

We only received two new pin releases today, which seems odd after several weeks of 10+ new pins every Tuesday.

This The Disney Princess Cottagecore collection is beautiful and understated still themed enough to fit into the park. We love every piece in the collection.

We found a few new mugs and tumblers in stock today, like the Avengers mug seen above and the Enchanted Tiki Room tumbler seen belowamong others.

These New aqua blue glitter Minnie ears are the new color trend coming to Disneyland. But for those looking for a more park-based theme to their ears, we’ve also found the Haunted Mansion Bride Ears seen below, accompanied by a large collection of Haunted Mansion clothing, accessories and household items.

In New Orleans Square, these new Jack and Sally Cudleez pillow plushies are super soft and squishy and ready for summer to go so Halloween can begin.

For more information on booking your next trip with our official sponsoring travel agent, the Vacationeer, visit wdwnt.voyage.

The upcoming showcase in New Orleans Square had its lights on inside. It used to be Le Bat en Rouge, but closed with the pandemic and never reopened. It’s sat here with blocked windows and signs alluding to the ‘Princess and the Frog’ theme, but hardly any work has been going on lately. Seeing the lights in the windows is at least a sign of life the building hasn’t had since early 2020.

In Tomorrowland, Finding Nemo Submarine Voyage has reopened to guests, but one of the effects remains disabled: the waterfall. The bubble jets at the base of the chute can be seen swirling and giving the illusion of a powerful impact, although there is no water powering this effect.

In front of the Magic Eye Theater, construction walls block the facade of the building. It’s too early to say that Captain EO is coming back, but we hope for it every day in our hearts.

Join the Darth Vader Collection we’ve seen in the parks before, we’ve got some new stuff to add with this t-shirt above, the hat below, and more.

We also found a new SW 77 College Teams backpack in The Star Trader.

These Funko Pop! Bobbleheads are based on concept versions of everyone’s favorite droids.

On the far, far outpost of Batuu, we met this little guy who is ready to fix all the droids you can bring home from Droid Depot – Babu Frik is now an interactive toy.

This thing is absolutely the scariest toy we’ve seen in the parks.

On the other side of the Avengers campus, we found Captain Carter’s shield. I don’t know how this shield managed to cross the multiverse and get here, but we’re glad it did.

After a month of renovation, the arc reactor tiles at the entrance to the Avengers campus are finally revealed once again.

One last farewell photo from Avengers Campus. Iron Man was patrolling the balcony of Avengers Tower, a rare sight these days. Even during the remote meet-and-greet period, Iron Man was downstairs near his private entrance to greet guests. Seeing him on the tower was perhaps a first for us.

Well, that’s all about us here at Disneyland. We are happy that you accompanied. Be sure to leave a comment below, letting us know what you think of the photo story. We will see you very soon!