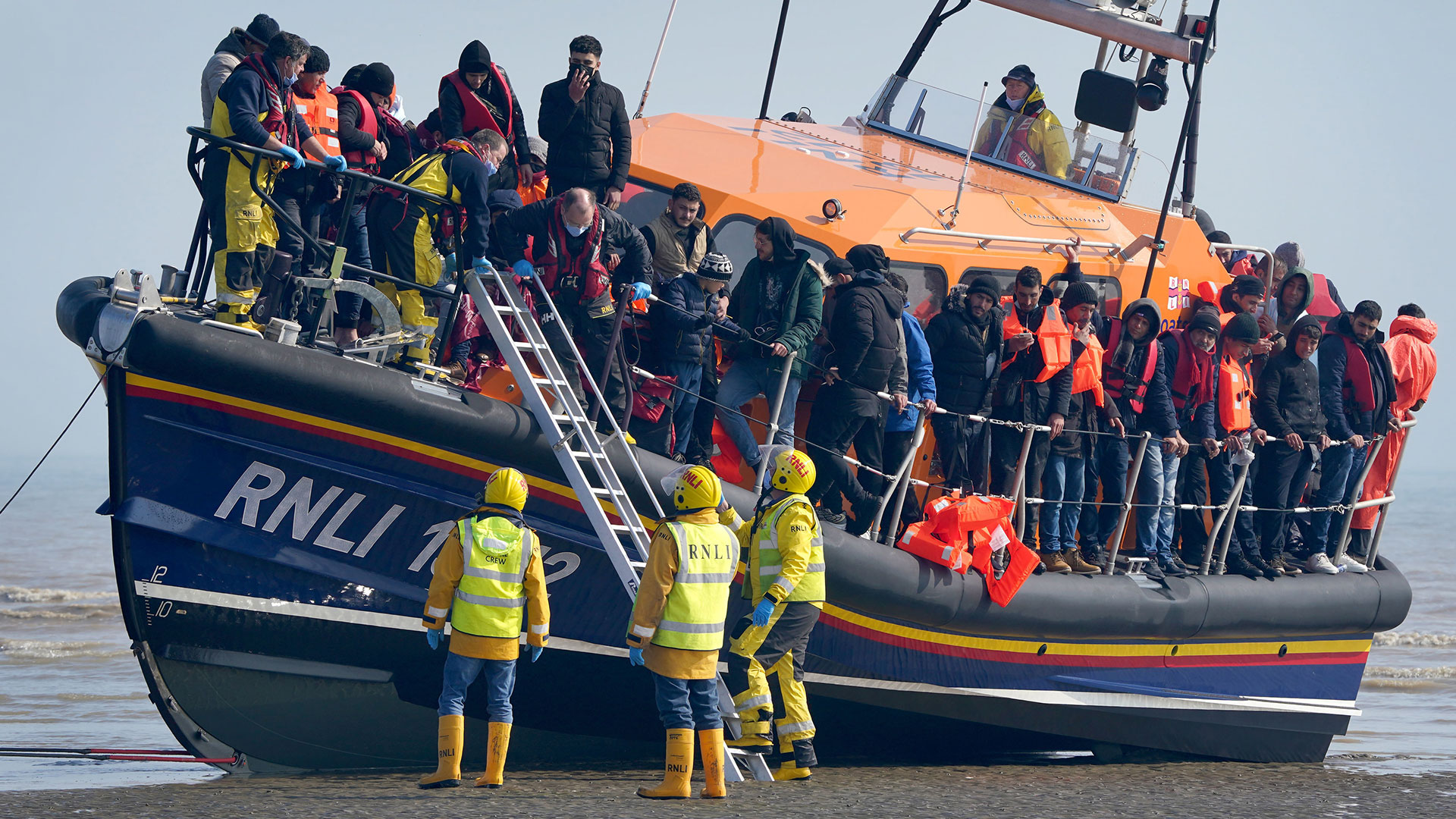 YOU either have boundaries or you don’t. And currently this country does not really have a border on our south coast.

How can I say this with confidence?

Because in recent years, tens of thousands of illegal migrants have crossed the Channel in boats. Coming from the completely safe country of France.

Many of these migrants were met at sea by British border agents, then transported to this country and accommodated in hotels in the south of England.

It is not a border. It is a ferry service for illegal migrants that costs British taxpayers millions of pounds a year. It is a drain on our resources.

And it’s a drain on the goodwill of the British people who are generous to those in need but whose goodwill is taken advantage of. 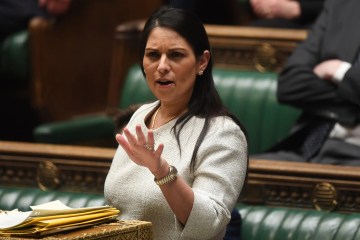 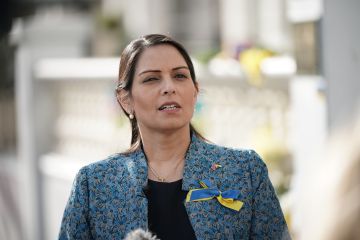 The political left seems fine with this. They seem to think that every young man coming to this country from anywhere in the world is both a needy asylum seeker and a big boost to our economy.

But wiser heads know that’s a lie. And that this country needs a real border on the south coast.

That’s why Home Secretary Priti Patel earlier this year announced her plan to ‘relocate’ people trying to enter Britain illegally. She also hopes in the process to crush the gangs of illegal smugglers who prey on human misery.

Currently illegal immigrants come to Britain and, through the European Convention on Human Rights (ECHR), gain all the rights that come with being in the country they have entered.

The Interior Minister’s plan is to send these people to Rwanda, where individual cases can be assessed.

It is not a revolutionary plan. The Australians did something very similar in recent years and immediately cured their illegal immigration problem.

But Patel is now facing some of the same criticism that was first leveled at our Australian friends. The left accused her of all the crimes in the book. Including racism, of course.

They have no plan to stop illegal migration.

But they always try to stop anything that might stop him.

The first illegal flight to Rwanda was due to take off next week.

But now a group of ‘charity’ activists and trade unions have sought an injunction to stop the theft.

They will, of course, argue that enforcing our borders goes against the ECHR. And that actually helps address a very late point.

Many people in Britain would be surprised to learn that we are still subject to the ECHR.

Wasn’t the whole point of Brexit that we be able to govern ourselves? In particular by being able to make our own laws and not have foreign laws imposed on us?

This is what the British thought we were going to get when we voted Leave.

The political left seems fine with this. They seem to think that every young man coming to this country from anywhere in the world is both a needy asylum seeker and a big boost to our economy.

But six years later, this country is still stuck in the ECHR and it is not at all certain that we will get out of it.

Ministers appear to have kicked the issue out on the road or put it in the ‘too tricky’ bin.

But unless the government addresses the ECHR and the jurisdiction of the European Court*, these questions will continue to arise.

Human rights lawyers know that with this they still have a good tool to tie up the UK government.

They know that even if Prime Minister Boris Johnson and the Home Secretary want to do something, as long as we are in the ECHR any group of activists can have the upper hand.

Indeed, Interior Ministry insiders have now admitted that the chances of the first flight to Rwanda taking off next week are now “slim”.

This flight is supposed to contain the first 130 illegal immigrants taken to the Rwandan capital of Kigali.

They must arrive at a resort hotel with a swimming pool. All once again paid for by the British taxpayer.

The left with open borders presents all of this as absolute hell. That’s why they try to stop the first flight.

They know it’s going to take a whole lot of planes taking off just to pick up the people that’s come this far.

And they know if they can win this battle, they could win the whole round.

Personally, I hope that the Minister of the Interior will prevail and that this humane and reasonable response to the border crisis can work. But it should also present a reminder to Patel and the Prime Minister.

We need borders. But we also have to make our own laws. You can’t do one without the other.

It’s time to get those ECHR papers out of the “too complicated” bin – and get to work.

JOHNNY DEPP was spotted in Birmingham this week being helped out of the Grand Hotel.

A security team supported Depp on the way to the car, saying they were protecting him from the large crowds following him everywhere.

I’m not so sure. The star held a cup of coffee with great determination.

Maybe it was early morning and Depp just needed some caffeine.

Or maybe it was the remains of the “mega pint of wine” we heard about during his recent legal proceedings.

A FUN IDEA OF CULTURE

IN 2025, Bradford is set to become Britain’s City of Culture – an award that may have come a little early.

It is true that the citizens there have historically been interested in culture.

In 1988, the city became world famous when local Muslims burned a copy of Salman Rushdie’s novel The Satanic Verses.

Images of this have been seen around the world and helped pave the way for the Ayatollah of Iran to issue a death sentence against the British novelist.

This week, local faith leaders showed that little has changed in the past 34 years. They led protests against a new film called The Lady Of Heaven, which some Muslims accuse of “blasphemy”.

Large numbers of protesters turned out in Bradford, accusing Cineworld of hosting a ‘hate film’ and demanding its removal.

Cineworld has since announced it has pulled the film across Britain, following similar protests in Birmingham, Sheffield and other cities.

At this point, you must be wondering what exactly is Bradford such a leader in? The best book burner? The fastest movie bans?

Are these categories for the coveted title of City of Culture?

There are plans to ban smoking in pub gardens.

This includes raising the legal age to buy cigarettes each year. And make sure pub gardens are smoke-free zones.

But one thing always intrigues me about these anti-tobacco campaigns.

All push an open door. Yet, at the same time, attempts to legalize the cultivation and growth of cannabis.

Politicians like Sadiq Khan compete to look cool while talking about legalizing marijuana.

So what’s the problem ? Are people going to be penalized for smoking tobacco, but shot in the back if they smoke weed?

What strange contradictions our time raises.

SEEMS HATE TO ME

TRAIN drivers are due to go on strike later this month.

The Rail, Maritime and Transport Workers Union has announced that 50,000 of its members will bring the country to a standstill for three days.

General Secretary Mick Lynch announced: ‘Our union will now embark on a sustained campaign of industrial action which will shut down the rail system.’

Could he look more proud of himself?

Maybe he should be.

After all, the transport union bosses continue to pull off an incredible coup.

They present their members as victims of savage cuts by the Conservatives. They claim no one has ever had it so bad.

In fact, train drivers in this country can earn nearly double the average household disposable income. With annual salaries of up to £60,000, drivers and their families also enjoy travel benefits and more.

I hope people remember this as the country comes to a halt later this month. Like hard working people are forced to find a way to work.

And the slowly re-emerging tourism trade takes another hit.

It would be nice if Labor leader Keir Starmer could sense the resulting public rage. Maybe he could even give the unions a stiff talk?

Or his union payers.

The train conductors might have decided to slow down.

But they’re still marching all over Starmer’s Labor Party.