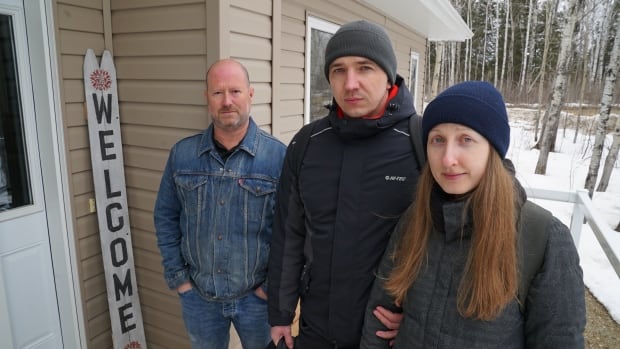 It’s been a long journey from war-torn Ukraine to a quiet cottage community in western Manitoba, but Hanna Palamarchuk and Mykola Prysiazhnyi have finally made it.

This opportunity includes a safe place to live and jobs, an offer developed by residents of the cottage communities of Clear Lake and Onanole, Manitoba, with financial support from Elkhorn Resort and the Municipality of Harrison Park.

“They emailed me directly after seeing the news program you put on and they got their documents pretty quickly. First comers want to work straight away which is great for us,” said Chris Phillips, manager of Elkhorn Resort. .

The couple have experience in the hotel industry. With their excellent English, they will work as waiters in one of the restaurants and live in company accommodation.

“It was a really good experience,” Phillips said of the process of bringing the couple to Canada. The station is working with at least two other family groups who also want to move here after seeing the CBC story.

“It’s nice. When I hear about some of these people and what they’re going through, it’s pretty heartbreaking,” Phillips said.

A couple fleeing war-torn Ukraine have landed in a quiet cottage community in western Manitoba that offers them a safe place to live and jobs. 3:24

Palamarchuk and Prysiazhnyi’s journey began in kyiv on February 24 when Russia invaded Ukraine.

“I heard the first one, I’m not sure, was it a missile or was it the fighter jet at 5:00 in the morning? And then I heard the explosion not that far away. I got it woke up [Palamarchuk] and we started looking for news to see what was going on,” recalls Prysiazhnyi, 33.

After spending the next day in kyiv’s metro stations, which doubled as bomb shelters, the couple decided to join others heading west into Poland.

“We were hoping that we would be back in maybe a week or two because we thought the negotiations would start and they would come to some kind of conclusion and we would stop fighting,” Prysiazhnyi said. “But it only got worse and worse.”

The couple crossed the Polish border on February 26, just after the proclamation of the mobilization of men of combat age.

Prysiazhnyi was allowed to leave Ukraine because he was discharged from military service 12 years ago due to health issues that were on an exclusion list.

Once at the Polish border, the couple was touched by the kindness of foreigners.

One of them picked them up and took them to his family home until they could find another place to stay.

In March 2021, the couple had started the immigration application process for Canada’s Federal Self-Employed Program, based on their small e-commerce leather goods business. (It’s on hiatus because they had to leave all their tools and materials behind, but they’re hoping it’ll start again soon.)

On February 28, two days after fleeing to Poland, they got an appointment to provide their biometrics to Immigration, Refugees and Citizenship Canada.

On March 17, the Canada-Ukraine Emergency Travel Authorization program was launched. The next day, they applied for temporary residency with an open work permit. Within two weeks, their CUAET applications were approved. IRCC is currently processing their applications for permanent residence.

“So many happy coincidences that brought us here,” Prysiazhnyi said.

The two arrived in Manitoba with just two small survival backpacks they had packed a month before the Russian invasion. Each bag contained: their documents, a laptop and chargers, their valuables, a camera, a flashlight, three sets each of t-shirts, socks and underwear, a jumper, first aid kits , protein bars and hygiene products.

With the province shut down before a blizzard, Phillips took them to nearby Erickson for some shopping.

This part of Manitoba has a large Ukrainian population. Every summer, the nearby community of Dauphin hosts the Ukrainian National Festival of Canada.

News of the arrival of the newcomers spread quickly.

Within minutes, the Co-op store manager was introducing them to one of his employees, originally from Ukraine.

Her eyes filling with tears and her voice cracking, she and the couple immediately began talking to each other in Ukrainian and shared an emotional embrace.

“It was unexpected and surprising,” Palamarchuk said with a big smile on his face.

“She is from Vinnytsia, about 30 miles from where we grew up,” Prysiazhnyi added. “In different parts of Ukraine, people speak a little bit different Ukrainian. And she speaks Ukrainian like we speak.”

As they bought shampoo, cereal, bacon and bread, several people stopped to shake their hands and welcome them to Canada.

Palamarchuk and Prysiazhnyi are still worried about those they left behind in Ukraine. They also worry about the future of their country.

But they are grateful for this chance to start a new life.

“We are very lucky and we are very happy to be in Canada,” said Prysiazhnyi.