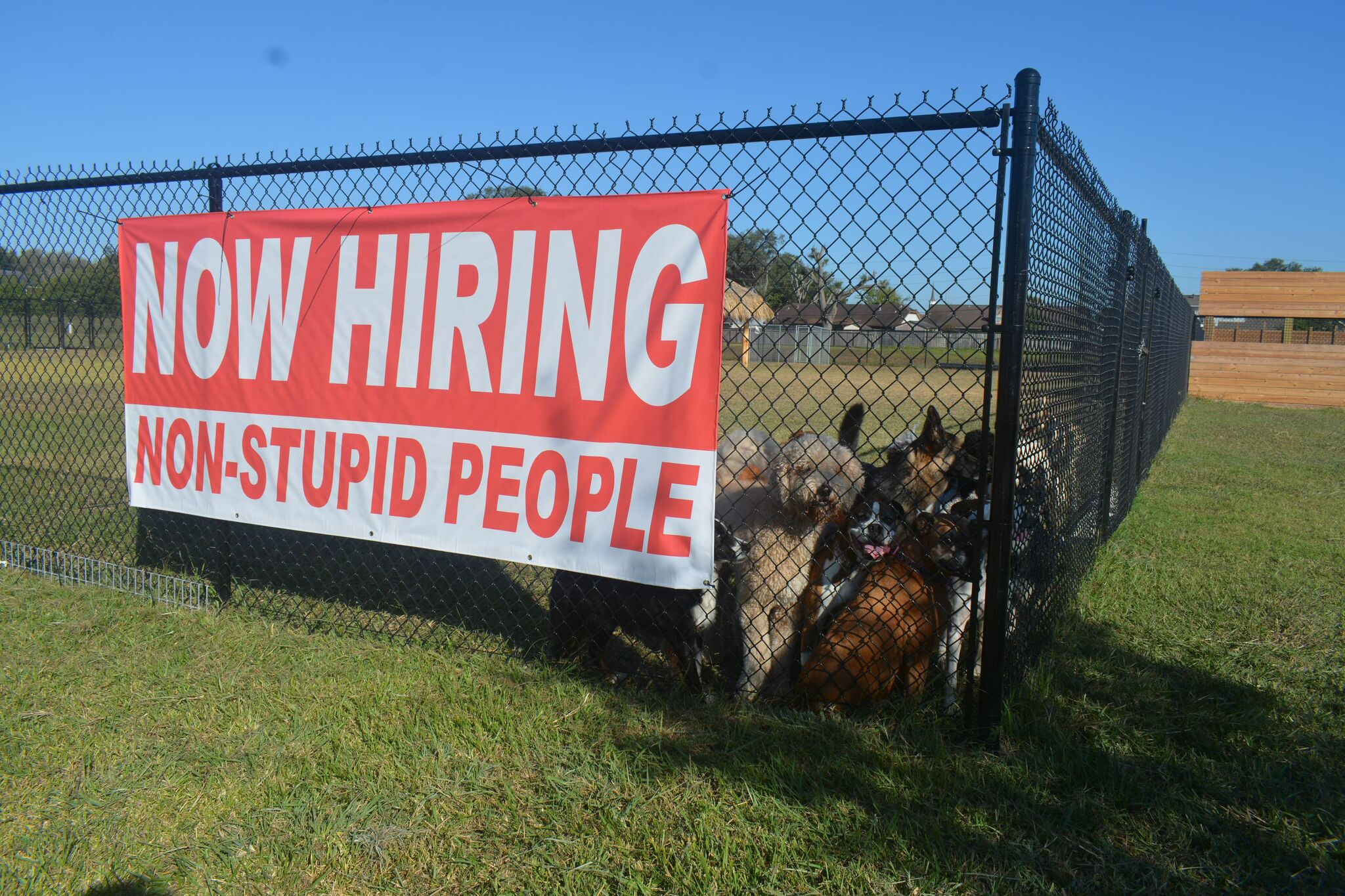 A hiring sign outside a pet daycare center with a particularly direct message is getting mostly positive reactions from the Pasadena community.

Walter Parsons, owner of Pets Gone Wild Resort on Crenshaw Road, said he had an immediate reaction on Tuesday after putting up the sign, which read: ‘Now hire people not stupid’. A woman called to complain, saying the sign was offensive.

“I said, ‘Ma’am, I’m sorry, but (there are) much worse words that people use that are offensive. I’m not going to pull it back,'” Parsons recalled.

Besides the first caller, who posted a photo of the sign on his neighborhood site, Parsons said the response has been overwhelmingly favorable.

Despite spending hundreds of dollars on advertising jobs on Facebook and other job search websites, Parsons struggled to land interviews. That’s when he tried something different.

“I was having dinner one night with my wife and looked on Amazon and this was the very first thing that came up,” Parsons said of his red and white 4×8 sign. Costing $134, he and his wife thought it was a fun, unique, and reasonable purchase.

“I can spend this week advertising (online) and not get a response,” he said. So far, his investment seems to be paying off. Many have come to the facility to fill out applications in person, he said, and he has already hired someone with extensive experience.

That said, the job is not easy.

As someone who built his business from the ground up, Parsons said he tries to find employees equipped to handle “hard work.”

“You’re there from sunrise to sunset,” he said. “You get breaks, but you watch dogs (anywhere) 60 to 140 pounds. You don’t want a dogfight. It’s like the kids in a daycare. They fight and, if the opportunity presents itself, the dogs will fight too.”

MORE ABOUT DOGS IN PASADENA: ‘Extremely Full’ Pasadena Animal Shelter Is Calling for People to Adopt or Adopt Pets

In fact, Parsons said he hired someone on Monday and fired her on Wednesday after repeatedly telling her to hang up her cell phone.

“I’m not going to pay you to be on the phone,” he said. “There are 60 dogs here. You gotta pick up the poop. You gotta stay on your toes. I don’t need some incompetent person forgetting to lock this door and a dog getting loose.”

Parsons currently has 14 employees. With the holidays – one of his busiest times when he usually has up to 127 dogs – approaching, he wants to have one employee for every 15 dogs.

“You don’t walk into a petting zoo,” he added. “If you think you’re going to play with dogs or cats or guinea pigs, you’re wrong. You can do it while it’s slow, but you have work to do.”

Pasadena resident Darlene Daniels brought Bear, her pet Labradoodle, to the Pets Gone Wild Resort for the first time on Friday morning. After searching for a place for Bear’s dog training and boarding, Daniels said the sign confirmed she had come to the right place.

“You want the most qualified people to take care of pets. That’s my baby,” Daniels said. “…(Parsons) did it to be funny, and I thought it was funny too, but that also sealed the deal for me.”

Candice Reyes came over from Galveston County to drop off Rafael Nadog, another Labradoodle, for the day. Reyes has been coming to the resort since January 2021 and believes the sign highlighted the skill of the employees they choose to hire.

“I just saw the sign yesterday and laughed because we knew that was Walter’s sense of humor and we took it as a joke,” she said. “I can see why some people might be offended, but you hope they hire responsible people.”

Rebecca Burke knew nothing of the sign when she dropped Belle, her two-year-old German Shepherd, on Friday morning. Belle was recently adopted from the Pasadena Animal Shelter and still a bit shy, so Burke approved of the sign’s message.

“I mean, I wouldn’t want to hire stupid people, so I don’t mind,” she said. “(Belle) is precious, and it sounds like they want the people they hire to be committed to caring for animals, and I appreciate that commitment.”

Billionaire William Lauder is tearing down a pristine $110 million mansion. The residents are not happy.