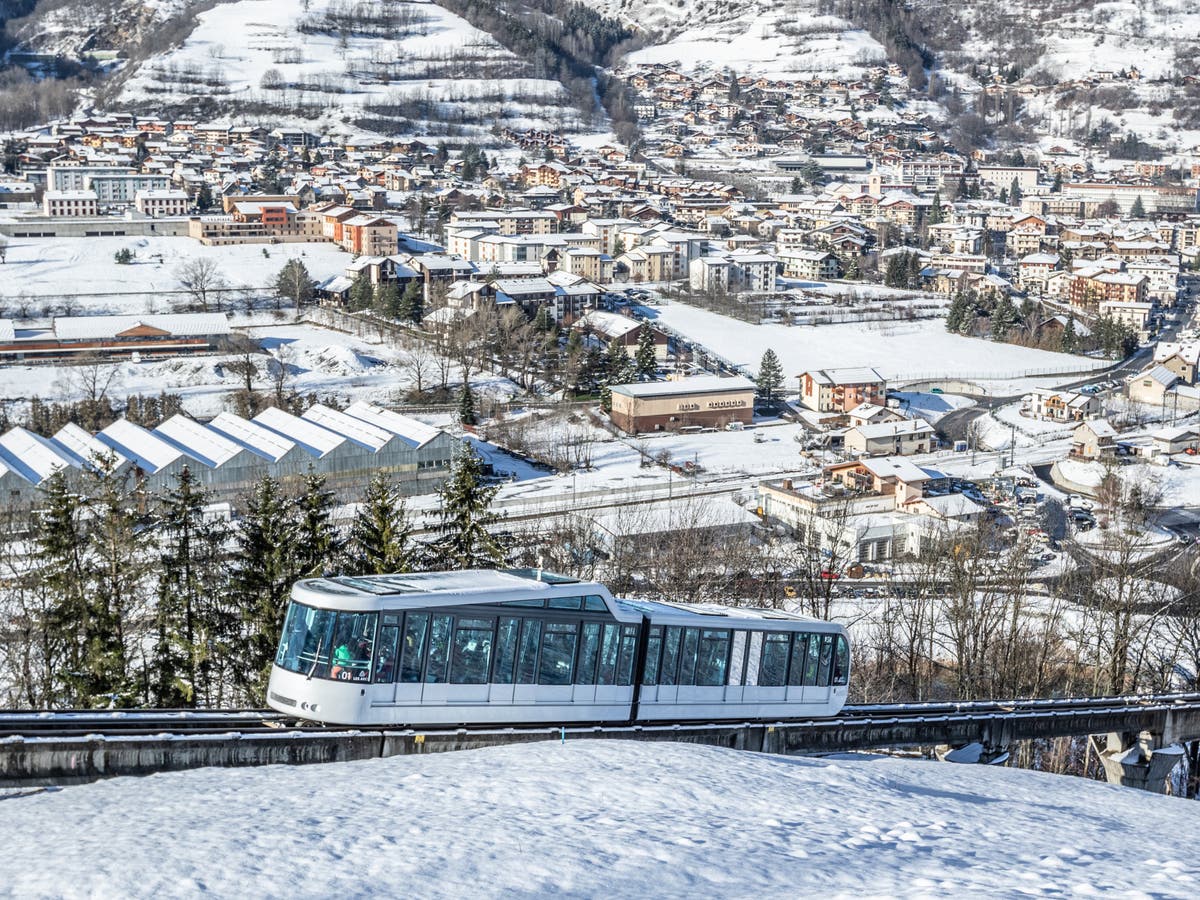 First steps: trade the plane for the train during a ski holiday in Les Arcs

Les Arcs desperately needs you to take the train there. Desperate.

“We have carried out an audit of our carbon footprint – 57% of it comes from customers who come to the resort,” explains Laura Cumin, ski area manager.

“We are doing our part and we really want to encourage people to take public transport here.”

And for good reason. Unlike most French resorts, Les Arcs offers a unique proposition – a seamless, end-to-end transportation experience for flightless (and carless) travelers from all over Europe. At the foot of the station is the town of Bourg-St-Maurice, with a well-served station. From there, rather than a long bus transfer over winding mountain roads, travelers can take the regular funicular service and arrive at Arc 1600 – the lowest of the ski resort’s four villages – in around seven minutes.

Are you staying elsewhere in the resort? A free, regular shuttle runs between the villages of 1600 and 1800, and between 1800 and 1950 and 2000. Each of the outposts is pedestrian and car-free. “Our founders were already thinking about the environment in 1968 when the first part of the station was built,” explains Laura.

As a flightless traveler – and a big fan of Les Arcs, having done my one and only ski season there 13 years ago – I wanted to try the trip. London’s outdated ski train service has been revived this season by tour operator Travelski Express, which chartered a Eurostar train every Friday evening, returning on Saturdays, and sells full week passes to resorts in the French Alps, including round-trip trains and transfers, accommodation and lift passes.

The process could hardly be simpler – I finished work as usual on a Friday evening, drove to St Pancras station and boarded the train ready for the 8.04pm departure. A real dinner was served on board – forget French cuisine, bangers and mash or mac’n’cheese was the order of the day. The lights were dimmed and the train sped through France overnight, arriving at the mountain towns of Moutiers (the drop-off point for skiers heading to the resorts of the Three Valleys ski area) and Bourg (for resorts such as La Plagne, Tignes, Val d’Isère and La Rosière) the next morning.

The service is direct – no stops in Paris or elsewhere before the mountains – and takes around nine hours. But the nice part is that the train arrives in Bourg at 6:43 – there’s no way someone stealing can beat you into the station (unless they have access to a TARDIS).

Unfortunately, the train isn’t a real couchette – there are no couchettes with beds, so you have to resign yourself to sitting on a seat – but the excitement of dropping off somewhere in the suburbs of Paris and waking up amid the splendor of the Alps goes a long way to catching up. I sleepily pulled my huge bag off the train (another perk of reaching a ski resort by train is the generous baggage allowance at no extra cost) and headed to Café Le Tonneau around the corner from the station, where Travelski Express kindly sets up a light breakfast of croissants, juice and coffee, included in the package, to bridge the time between the arrival time of the ski train and the first funicular to Les Arcs at 7.30am.

As part of the station’s effort to get people to swap road for rail, they’ve made the funicular free for anyone arriving by train this season – just show your ticket and board.

I arrived in 1600 as the sun was rising; my luggage was dropped off at the three-star Arcadien hotel before 8 am; 15 minutes later my ski and boot rental was picked up. With a good 45 minutes left before the opening for the day of the Combettes chairlift near the hotel, I had time to stop by Bistrot de Dodo for an extra dose of caffeine and to reflect on my supreme luck. It was a perfect day for bluebirds, with skies the color of chicory blossoms and light-dappled slopes that were sure to flare up when the sun reached its peak.

By the time the first chairlift tipped over at 9am, I was ready and waiting for it as much of the resort woke up. Greeted by nearly empty tracks, I enjoyed the “early tracks” in the truest sense. Saturday is transfer day in the mountains, which means the first guests usually don’t arrive until at least noon. Any fatigue was soon swept away by the rushing mountain air as I flew, like a dream, on smooth, silent trails. It was unreal – like many Brits my last time on a mountain was ages ago, in 2019 before the pandemic.

A few runs to warm up and reminisce about how this whole ski business works – thank goodness for muscle memory – and then it was time to join Alex, a 20-year-old fresh from ESF ski school, who m showed around the vast ski area (425km of pistes across the entire Paradiski area shared with the neighboring resort of La Plagne on the other side of the valley) hurtling down the slopes up and down while I screamed and screamed in its wake.

While much was familiar to me from my blissful five months here in 2008/9, the resort had undergone some impressive upgrades, many new ones over the past few seasons. Arc 2000 received a high-end injection in 2016 with the opening of the Taj-I Mah – the only five-star hotel in Les Arcs – while a gargantuan Club Med four and five trident property was launched in Arc 1600 in 2018 This season brought Bear Lodge, Arc 1950’s newest luxury, with 30 rooms and 12 chalets.

The après-ski vibe was also boosted by the opening of an outpost of legendary piste bar chain, La Folie Douce, in 2019. But, most excitingly, 2021/22 saw the launch of the latest addition to the station. attraction – a 1,077 m long zip line, starting from a newly built base next to the lower station of the Aiguille Rouge cable car at 2,680 m.

I felt compelled to give it a try, relishing the thought of promised speeds of up to 130 km/h while being winched into a serious-looking harness. “Ready?” the operator asked, as I watched the 600m drop. ” Yes ! was soon replaced with “Wheeeeeeeee!” as I raced down the line, eyes streaming and shattering the white and blue of the landscape into kaleidoscopic fragments.

It was over far too soon – that’s the problem with a high-speed adrenaline rush – and then we went up to the top of the Varet gondola to discover the other new owner: Beautiful Organic Break (aka BOB), a trendy café and terrace that opened its doors this season. It’s lunch on the slopes, but not as we know it – swap the traditional cheese-laden stodge that most slopeside restaurants serve for freshly made open-faced sandwiches, graded by length, accompanied by healthy bowls and filled with cereal. I opted for the CARE bowl – tomato, lentil and quinoa puree, toasted almonds, roasted vegetables, broccoli and tabbouleh – and balanced it all out by ordering an absurdly plump blueberry pie with marzipan and custard for the after party.

Feeling energized but not bloated – a welcome change from the majority of my post-lunch skiing experiences – I headed to my final stop on the “new things” Visit of the Arcs. Also new for this season is the Mountain Animal Museum, which is free to visit and is full of cute and informative exhibits on alpine creatures like chamois, marmots and ibexes. It is part of Les Arcs’ commitment to do better in terms of nature protection.

“We want to reduce our impact as much as possible,” Laura said. “We have measured and mapped all the wildlife we ​​have in the ski area – so now we know when we want to build where we can do it safely. We are also actively working to protect our local wildlife, working closely with the local Vanoise National Park.

The new city council has taken an even bolder step: it has suspended all construction in Bourg and Les Arcs for at least the next six years.

It’s measures like these, along with auditing its carbon footprint, installing solar panels on elevators to gather energy, and planning for the use of water needed to make snow to create hydroelectricity, which led Les Arcs to receive the Flocon Vert. . This certification is granted to ski resorts that meet a set of 20 sustainability criteria and has only been obtained by 11 destinations to date.

Times are changing, not just in the 13 years since I tried my hand at professional skiing, but in the last few seasons alone. I feel a warm glow seeing that my old stomping ground, in addition to having one of the largest ski areas in Europe, is among the forefront of resorts actively striving to tackle in the face of the climate crisis. “We try to be smart rather than waiting for technology to save us,” says Laura.

So the next time you go to the Alps, why not trade the plane for the train? With resorts like Les Arcs striving to reduce their impact, it seems only fitting that we as travelers also play our part.

The Arcs zipline is open to anyone aged 10 and over and costs €55 each way.